One of the fun parts of working as part of a freelance journalist collective in a city filled with creative minds, sometimes you get invited to something interesting and unexpected.? Sometimes its just the opposite. 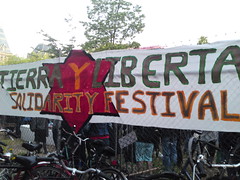 Today some of my ambitious colleagues asked if I wanted to sit in and give my 2 cents at a meeting regarding the future of television programming (on Dutch public TV specifically).? What started as a meeting of 4 warped into a meeting of 8, with various people coming from TV, radio, documentary and backgrounds of all kinds.? Everyone got a chance to say their piece regarding what they think the future of television should be, what their media consumption habits are, and what kind of programs they would like to see.

I sat there completely conflicted. My blanket answer, without thinking too hard or too long, is that television is dead. Ignoring for a moment the fantastic programs that I’m addicted to being put out by channels like HBO, I still get the feeling that when it comes to creativity and diversity, it is better to look to the internet than to the tube. Plus I’d rather consume my favorite programs (TV or otherwise) using my computer or what would better by called my media station which uses my laptop as its brain.

But then comes that question. What kind of programs would you like to see more of on TV? Other than wishing I could see my favorite internet programs, I just blurted out my favorite public-tv/radio style programs of the past few years: This American Life, Story Corps, and 30 Days.? I fell back on my usual preference of wanting more stories about people’s families. Families that have gone through interesting times and changes, being able to look back and compare then to now, maybe even teach us something to help better run this world in the present.?? I talk about my favorite StoryCorps episode, or my favorite TAL episode, but I feel like it sounds like a soap opera. Even though its not at all. Its more about real stories, complete with the mundane or the complex, the raw story that someone has lived. Unlike traditional TV, no dressing it up, no focus groups or panic about how many people will watch, no attempt to be hipper than hip. That would be my program.

But is TV, public, private or otherwise, willing to throw away such long established conventions? Do they even know how to function in the kind of world we who live our lives and publish content all over the internet, could they understand and thrive in our world? I’m not convinced.

Time to go re-watch an episode from The Wire -Season 2.