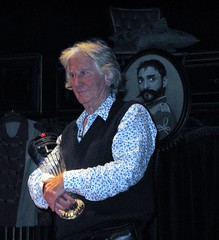 What we think sometimes, we don?t think that there is a difference between moral and ethics. Moral is mores. It?s customs. And it was moral in this country, my country?slavery. It was moral. It was moral to buy a human being. So I?m not moralist, because I know that in moral there are horrible things. But I am ethical. We need to create an ethos. In Greek, it means the tendency to some kind of perfection. And my kind of profession is solidarity, is dialogue, is democracy?real democracy, not one that we see. That?s my?I want to?not to accomplish, because to accomplish?not to accomplish, to go on. To go on.

There is a poet, a Spanish poet, Antonio Machado, who says, ?The path does not exist. The path, you make by treading on it. By walking, you make the path.? So we don?t know where the path leads, but we know the direction of the path that we want to take. That?s what I want, and not to accomplish, but to follow, until I can?t.