You Want the Economy Explained

As under-reported and alternative as I may hope to be, I also consume lots of the mainstream as well. So when I recommend you listen to this very special episode of This American Life, I realize that blogs all over the internet are doing the same and there is no shortage of linking and praising going on.? Actually I didn’t love it, but this particular episode does what it says it does…? you listen for an hour and you will understand why the economy is the way it is now, specifically when it comes to the banks. 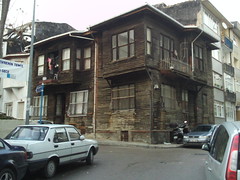 As I listened to this program twice, I kept thinking about the culture I grew up in, especially post-high school. The discussion in New Jersey was always about owning… owning house as this logical thing to do.? That alone might be fine were it not for the underlying suggestion that renting was for suckers. That not owning something or having debt on a credit card and needing to make car payments, that somehow the LACK of any of those was odd.

It is not meant to be an I-told-you-so by any means. My favorite people on the planet have mortgages and all that business. But I have to say, I hope now, at least in the United States where I was born and raised, we can get back to a time where its not shameful or immature somehow to NOT own a home. And beyond that, could there come a new era where people STOP borrowing beyond their means and buying without actually being able to afford something.? I’m both wondering and hoping as I listen again to the explanation of the citybank balance sheet and the dollhouses and a simple matter of 90 dollars.? (listen to the program).