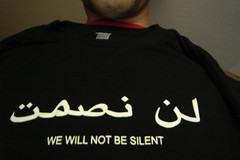 I’ve very proud and happy for Raed, yet at the same time he should have never had to go through that ordeal. The so-called freedoms of the United States, freedom of expression, should have applied for him. yet didn’t as so often they don’t in recent history.? Still it is a good day when courts remind corporations and governments what the laws are and that they can’t just make things up as they go along and govern based on ignorance and racism.

I enourage everyone to keep wearing these shirts, ask for one if you don’t have one already.? I’ll keep wearing mine proudly and tell anyone who asks the story of this brave person I know of by the name of Raed.