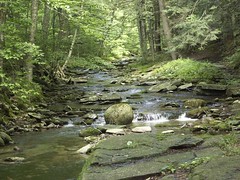 I thought of Al today as I read about how NY state has loosened restrictions on drilling for gas in the NYC watershed are. Using a method called horizontal drilling under the Catskill Mountains, there are proposals to drill for gas. This despite the risk that drilling would bring of spilling toxic chemicals into New York City’s drinking supply. Interfering with the water system could also force the need for building a water treatment plant which would cost an astronomical amount. This despite the fact that over a decade ago, concerned citizens and watershed experts like Al Appleton eliminated the need for building such plants by promoting water conservation and cleaner farming techniques upstate.

The drilling is still not a certainty as public hearings still have to be held and environmental organizations are taking action to have all the facts laid out regarding the risks and need for such drilling. Myself I’d like to hear from Al on this development. I can only imagine his immediate concern, drinking water for 9 million people, one of the most revered water systems in the world, once again under threat.