Laying a Presidency to Rest

You don’t really need me to explain or describe the reaction to yesterday’s election here in Europa… so I’ll skip right past it.

Looking to the future yesterday, I was picturing how strange it will be for the world, after so many years of a US administration and an overall image of the United States government as this plotting, bumbling, profit greedy entity.? What I mean is, having the Bush administration was like having this internernational measurement standard; if you wanted to know what was a bad idea or some indicator of a poor government, you would look to the actions of the Bush administration.? Based on this, alot of people created careers and followings for themselves.. entire systems of meaning, I would venture to say.

Take Latin America, presidents of nations such as Venezuela, Bolivia, and Equador, who have long said to their people – we do things contrary to that disfunctional US administration. They’ve experienced wide spread support using such rhetoric, and it is quite understandable that so many citizens looked at these leaders, and comparing them to the Bush group, said – Yes, we choose this guy.

Now with Bush leaving, and what seems like it will be a new kind of government, one more open to international cooperation, sustainable development, and rational thought, aren’t such leaders losing their number one reference point.. their rally cry? 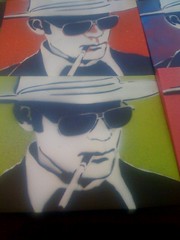 Other comparisons can of course be made, looking at regions like the Middle East and of course the Africa, where it would seem people are, for the first time perhaps ever, excited and eager to work with this new president.. with the US.? Again, pulling the rug out from under a system that over the last decade, had become quite standard.

Still it isn’t only other nations that are entering a strange moment in history, many of us critics and concerned citizens, we’re losing the best evil emperor many of us have ever known. After so many years of not having to think hard about what is a good policy or a bad policy, suddenly we are now put in a position where we will have to look closer and work harder, as a new and potentially better functioning administration takes over power, no more reliably awful president.

This line of reasoning all started while listened to the most recent edition of On the Media, as they interviewed an author about the work of the great Hunter S. Thompson in the book that shaped alot of my journalistic thinking, Fear and Loathing on the Campaign Trail. The author, at one point, explains that when Nixon finally died, Thompson went into a strange kind of celebration, fearing the great task of having to put this president whom he so hated, to sleep once and for all.? For me it seemed he had lost his nemesis, which is not always the bliss you might expect.