When I was a kid in New Jersey there were always abandoned railroad tracks somewhere. You could be playing baseball or soccer and the ball would roll away from the field and toward some tree line or old factory and there would inevitably be tracks that were out of service, usually with bits of garbage strewn around them for good measure. It was the 80’s and 90’s, the era in the US where people just assumed rail had no future and it was more important to widen the highways and sell more cars. 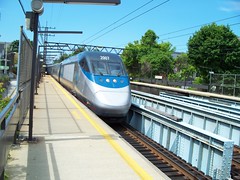 Almost 20 years later more and more people in the US realize this outlook is what has no future, and railroads are needed now more than ever.? The problem is when they look to those old lines, they find they’re unusable or, in many cases, they’ve been removed and replaced with condo’s and parking lots. Occasionally they’ve managed to salvage an old line.

Meanwhile on the existing rail lines still in use, national rail service is a pitiful shell of what it could have been compared to Europe or Japan. Years of under funding and mis-management have left AMTRAK with an outdated fleet of trains that can’t travel more than an average of 80mph/128kph, and that is when they’re not being delayed by freight trains. Recent studies have revealed that indeed freight trains are the leading cause of the national rail carrier’s infamous delays.? Crazily enough, the freight companies actually own much of the track that AMTRAK uses.. again making it expensive and irratic in terms of costs and service as they illegally take priority.

The US congress has now approved a bill that must face the ignorant pen of the president, which provides funds and invesment to keep AMTRAK going and make a few strides towards mordernizing national passenger rail in America.

I suppose to many in the US, this is not interesting, as the belief that “rail isn’t practical” still somehow dominates.? Few have experienced High Speed Rail in other countries and even fewer could ever afford to ride the few ACELA – high speed trains that exist in the US.? Whereas regular people with modest incomes can afford to take a TGV in France or the Alfa Pendular in Portugal, most of the people you find on high speed American trains are executives who’s companies cover the high cost.

Whether the bill will be passed by GW Bush is still not clear.? Whether beyond some symbolic language, these funds will really make rail more accessible and efficient in the US, is also still not clear.? But the absolute need for such investment for both the present and future of the country – that part should be clear by now.