While my specialty is critical thinking, especially when it comes to global issues; sometimes nations do things that I both agree with and am impressed by. 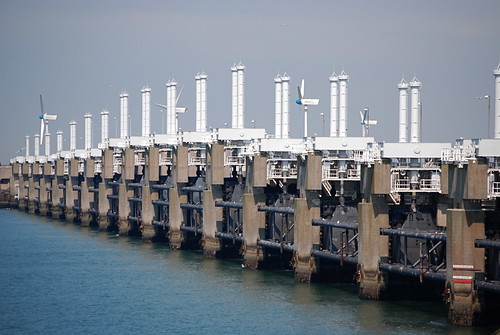 The Netherlands is working on something I believe is very logical and necessary — planning how to manage rising sea levels and global warming in the coming 100 years. They’ve planned in the past (1950’s) to manage the sea and their bodies of water in such a way that people are safe and can also enjoy the fruits of their water.? But as has become very apparent, the plans made 50 years ago are insufficient when you consider what we know now about the increasing speed that these changes take place. So instead of waiting for a major disaster, they’re devising a plan and dedicating big money to preparing NOW.

For the real details I recommend mr. Amsterdamize himself, who does a good job of laying out, in understandable terms, what the government is doing so far and what the ultimate outcome will be. Like myself, I think Marc finds it a strange contrast, going from watching the news about the gulf coast of the US scrambling to get out of the way of storms to reading about the Dutch government, planning for any storms or water disasters in the next 100 years.