Whenever I’m travelling long distance, either by train or occasionally by car, if a nuclear reactor appears on the horizon, I find myself staring at it.? One of the thoughts going through my head, an issue that still has no real long term answer: where do they put the radioactive waste? 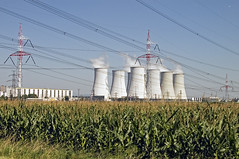 Over the years, trains carrying nuclear waste traveling between Germany and France have gained a decent amount of media attention.? These journeys used to attract crowds of protesters pointing out the danger and lack of long term plan that either country had for their waste.

In the case of France, I’ve seen the occasional documentary or news report about their temporary overground storage facilities. Always seemed odd, this was the best plan they had for waste that will be dangerous for the next few thousand years. Beyond that it isn’t easy to get news and information about the process of transporting and storing Europe’s nuclear waste.

Then this week the issue of a place called Asse in Germany has emerged, where a salt mine used for storing waste has apparently been leaking into, among other things, ground water. Thus adding more fuel to the fire of the raging debate in Germany about whether or not to stop using nuclear power and how soon to stop.? An important question and concern not only for Germany, or Europe, but in fact for many of the world’s nations that rely on nuclear energy but have no long-term, viable plan for what to do with the waste.

This will be the topic of a podcast this week with the help of a journalist (or two) in Germany.? Stay tuned for that and feel free to throw in questions or useful facts in the comments.