Mauritania and Greenpeace, Round 2

An unexpected series of emails came my way today from several concerned citizens around the world, as well as Greenpeace Netherlands.

The topic of these emails was a reaction to my podcast with Pauline last week, regarding some of her work in West Africa over the last year.? In that program I brought up the topic of Mauritania, as I remember she had been there to look into the fishing industry and a controversy surrounding the selling of rights to fishing their waters to EU based companies, (including a Dutch company that uses bottom dredging, though I did not ask specifically about that technique).? One of the major sides in this struggle, as Pauline mentioned, is Greenpeace, who are acting to stop such fishing in Mauritania and throughout the world, due to its extremely destructive impact on the world’s ocean. 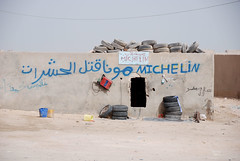 During the interview Pauline discusses things that most journalists in the mainstream will not tell you. The background to what she was thinking as she made her way around Mauritania, and how her observations influenced her opinion about what she was seeing.? Although I wish mainstream media would do more of that, instead of pretending to be so neutral and perfect, I recognize that alot of people and institutions out there, expect their journalists to behave as the mythical impartial news reporter.? Again, it is why I think podcasts can be of greater value if we really want to understand how and why the world is as it is; that vital understanding that no information is perfect, but by being a critical and engaged audience, we can not only be informed, we can understand that there are many sides worth keeping in mind, to an issue or disagreement.

So Pauline explained the side of those who see the practice of selling fishing rights to outside companies, despite the environmental risks, as worth it.? It should come at no surprise that regardless of where you stand on such questions, plenty of people on the ground in poor nations like Mauritania, will want to take the deal in the name of having jobs and boosting an economy.? YES, even to their extreme detriment in the long run. That doesn’t make it right, it is simply a fact that I felt Pauline communicated quite clearly in our interview.

In today’s emails, many people expressed their outrage that anyone would suggest that bottom dredging is ok and good for Mauritania.? They spoke critically and angrily at Pauline’s writing in the Dutch newspaper, and used my interview as some kind of evidence supporting their critique.? Greenpeace Netherlands have now asked to appear on my podcast to clarify there side in this. Obviously I’m glad to have them on, and eager to hear more about the situation in Mauritania. It is an issue, not to mention an important organization, that I’ll be proud to have on my program. But one thing I can say right now, none of this changes the respect I have for Pauline and the value I give to her work.

Expect that interview in the coming week