Because I said so. It’s just about that easy.

That and… I always carry either a recorder or a camera on me for the express purpose of capturing events that unfold around me that I feel need reporting and I am comitted to doing that reporting myself. Sometime ago, about the time I started this blog, whether I even knew it or not, I stepped into a new role for the average joe. I went from guy with lots of opinions and who reads too many newspapers, to citizen journalist.
Clearly some days are more citizen reporter whereas other days are simply me giving my opinions or personal analysis on topics of my choice. Regardless of what I choose to do on a given day, I’m disseminating information on a mass scale. To you sitting in your office after a great vacation, or you sitting home thinking about how you don’t want to get another job and you’re going to enjoy this time off. 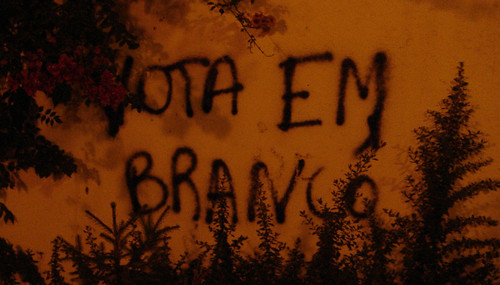 I’m stating what might be the obvious because the concept of citizen journalist is often abused, overlooked, ignored, or simply unkown to many people out there. They still see the big, well funded, household name media outlets as the official reference points for information and those are the only people who get the sacred title of “journalist”.

Those days are obviously on the way out. But there’ still much to be done.

Take the current situation with Josh who videoblogged the events that unfolded at a San Fran g8 demonstration earlier this year. I’ve taken some time to finally mention this because I’ve been so stunned and disappointed at how badly things have gone for him.

Briefly, the police discovered that Josh had videoblogged the demonstration and the clashes between police and protesters, they believed he had unpublished material containing evidence about who hit who. They demanded he hand it over. He refused citing the same rules that protect journalists from revealing sources or handing over material to authorities. As a videoblogger, he is, after all, a citizen journalist. But of course, a courtroom is the last place to expect modern thinking or knowledge of any concept like that. And even worse is the the federal government that is somehow persuing this case and rejects the idea that he is a journalist and deserves such protection.

That’s only a quick summary.. for more you can listen to the recent ON THE MEDIA which covers it well. Also there’s Josh’s blog which now seems to be run by his mom as he is now in jail. (yes.. its come to that point)

I’m watching this case and I’m horrified and glad to not be in the United States as an active citizen journalist. Actually the question comes to mind, could such a thing happen to me here in the Netherlands? I shamefully have no idea, my only strategy to this point is to stay the hell away from cops and give them as little information about my self as possible.

Dark days for the citizen reporter. But evil do-ers and governments beware… we’re out there.. we’re everywhere.. and when all is said and done, there are more of us then there are of you. I think.

Thanks Ryanne for reminding me that this issue needs to be blogged about.