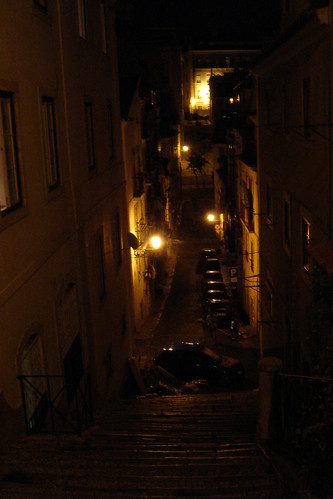 I left Lisbon about 4 years ago for Amsterdam. I had only been working here for a year.. but the city and I had a love affair that stretches back to the first time my parents allowed me to stay here on my own back in 1997. I was seventeen and allowed to stay in this little apartment on my own, and enrolled in summer courses at the university of lisbon. Some organization called the Portuguese-American something funded my education here, which made things even better, making it so I could have some money to travel around the country with all the great friends from school. I think it was back then that I knew I wanted to leave the US and live in this city.

My how things change. The metro now has a fully automated turnstyle system, which seemed like a joke that would never work 4 years ago. The once compact metro system not stretches far beyond any area I’ve ever been to. Once abandoned and forgotten apartment buildings now look like luxury lofts with blindingly beautiful paint jobs. My beloved late night book shop has moved and shrunk in size, but remains a centerpiece in the night life world for those who like books more than overpriced cocktails.

And yet. Things are as they always were. That same cat still sits in the windowsil down my street. My dear Elsa is still serving lunch at my favorite english pub. And that same blind guy is still tapping his stick and he moves from metro car to metro car in search of spare change. With its occasional flashes of modernity, Lisbon still remains Lisbon. Old, gritty, delicious, and romantic. Yup… it still has its magic.