Why bother trying to sleep… here in Paris people are hanging out their car windows shouting and harassing each other in celebration of the victory over Brazil. As we walked the streets from sitting on the banks of that canal, I must admit I’m too used to the Amsterdam small-town style of things, I was scared. B on the other hand walked in amusement. He kept saying “it’s great… I still can’t believe they won.” It was clear he enjoys seeing the city like this, and my fear is clearly a sign that I’m from out of town. He also pointed out that this victory is important for the national self esteem… apparently people have been pretty bummed sinced not getting the olympics and rejecting the EU constitution.

Let me try and salvage this from being another world cup post. The real story of my saturday in France was going out, for the second time in my life, to visit madame L at her little piece of paradise somewhere outside Paris. As I’m sure I mentioned during my last visit, I love the old house she lives in and the beautiful property around it including the old church. An extra bonus was that this time I brought MAdge with me… the long awaited meeting between the two of them… it was exciting. Together with the French man… the four of us poured over computers and cameras and sat outside enjoying conversation, but also the occasional comfortable silence. What a day.

I leave you with a photo of the house, which I hope the madame doesn’t mind me publishing. When I wake, and Paris is hung over, I will go to meet the Max and Stacey from Karmabanque for the Sunday Roast… and Im not talking food. 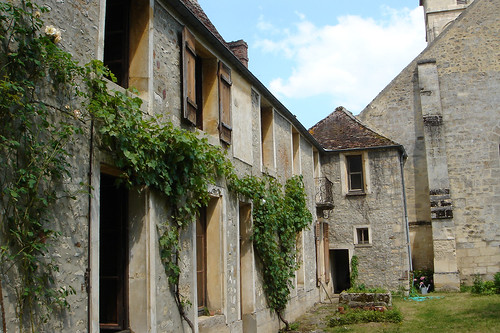