I have indeed arrived safe and sound though constantly hungry… here in Berlin. (watch this video for proof) The famous Tim is sitting to my right and most of the blog house has gone to sleep. I’ve no clue where I’m sleeping, so I’ll wait for everyone else to go to bed. Cept that some people are drinking like it’s 1999 and some teenagers just showed up at the door… so who knows when that will be.

Nevermind the shallow details, this blog is still about issues, regardless of how good the US plays or how awesome Ghana is.

I just pointed to an article in the Spiegel, about there being a run on German flags at all the shops. There have been quite a few podcasts recently covering the issue of the world cup and german nationalism. Interesting listening, for example, at Radio Open Source. Tim says this sort of thing was unheard of before this year. Normally someone running around with a German flag attached to their car would be socially cut-off… or scowled at.. or some sort of ostracizing.

A few berliner guests at the party tonight talked about this subject. They said it is pretty strange. Lots of mixed feelings about this new trend of being proud. I’ve heard Americans say its fine and good. But Americans are the last nationality I want to listen to about how much national pride is acceptable. 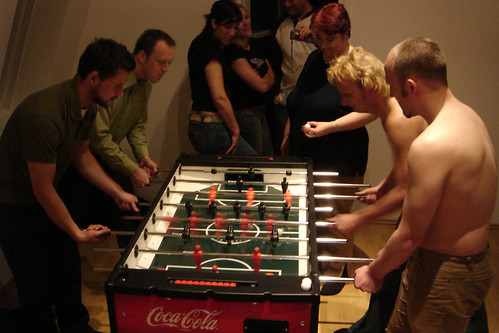 I digress. I’m in berlin for the first time in my life. Some of my favorite vloggers made the trip with me from Amsterdam and that makes it extra nice. Meanwhile, outside.. people drive around with flags attached to their cars. Beep beep beep.