Angola, Iran… and Poof Its Over.

I’ve been slow to post because life in Berlin was like a vacuum of time. No matter what time it was, I was supposed to be going somewhere to see something or someone. 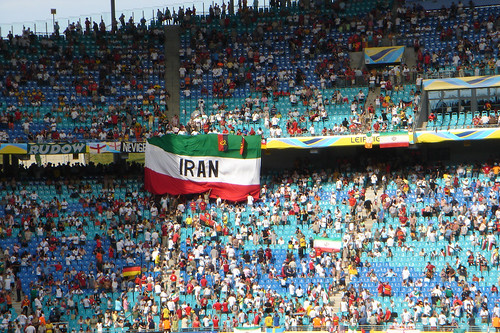 Not that I’m complaining; it so happens that I have some of the finest friends a guy could have waiting for me in Berlin whenever I’m up for a visit. They’re so influencial, I now have a new city I might one day like to live in. (I can hear my mom gasping already)

But summaries and additional stories will come soon, as well as getting back to real issues instead of the world cup distraction from reality. First I want to talk briefly of my visit to Leipzig to see Angola take on Iran.

My intention is not to talk about the game itself. You can read sports blogs for that crap. But I do want to talk about the people… fans.. as some call them. It was already exciting to be seeing a world cup match, in Germany, in a city was part of old East Germany. But to be seated amongst so many Iranian supporters, and a few sections over from a huge crowd of Angolans… it was quite the experience.

In both cases, it is unlikely any of these fans had actually flown in from the home countries. Most were probably immigrants living in Germany, perhaps even second or third generation. They didn’t sing the songs I think you’d hear at a stadium back in Luanda or Tehran, because they probably haven’t been in a stadium in either city in a long time. Instead they dawned the colors, joined with friends, and filled the stadium. They also cursed their players when they messed up, and shouted their favorite player names, over and over.

As I sat there thinking to myself…this is not a matter of nationalism for one’s country. This is about culture… roots.. and remembering. To cheer for a miracle or at least, a good day, for the idea of a noble and admirable nation that at that moment.. in that stadium… becomes a reality. 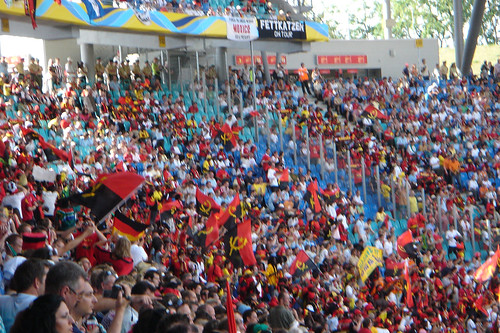 On the way out of the stadium, I was happy to hear Portuguese. Angolan Portuguese of course, the sweetest of all the accents, as far as I’m concerned. I listened and watched, as families and neighbors joked with each other about the failures of their team. Flag trading and handshakes were also a common sight between the two groups of fans.

At this point, lots of sports writers these days would praise this is the key to world peace and a sign of how great the world is. But I disagree. As nice as it was, both these groups have sufferred greatly to arrive where they are today. Entire lives were uprooted because of overwhelming and complicated circumstances.

A world cup match may provide some nice stories and some unforgettably sweet moments, but it should not mask the truth about the kind of world we live in and helped create.