Second Life May Have Some Use

Ok I promise this won’t be an excessively frequent topic on the blog. At some point I may actually get completely tired of it and you’ll never hear me mention it again. But until then, I have now become a pretty frequent participant in Second Life. 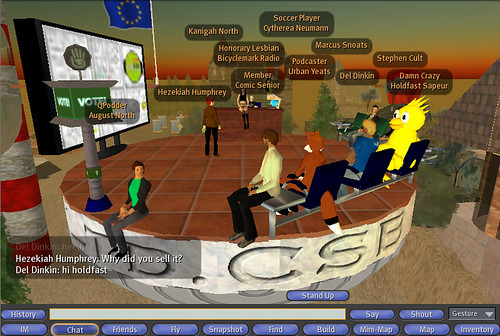 Not to get into all the explanation of what it is and whether its a waste of time or not, it is basically an online world, filled with people doing things, building things, socializing, and generally existing in an isolated yet fairly creative space. And the appealing part for me, has been that on SL I get to walk around and hang out with listeners and fellow podcasters. Simple examples: I hung out briefly with Adam in front of his Curry Castle. I’ve stood around Madge’s Casa Del Bloat as she tries to build a truely lesbian home. And I’ve walked around from place to place with Mikeypod, laughing about what we find and who we run into. It may sound lame, but these are experiences that wouldn’t be phsyically possible since we each exist in a seperate country, if not continent.

Then last night I experienced another potential benefit to this second life world. I had noticed the Comic Strip Blogger’s platform, next door to alot of the other podcast related buildings, and I decided to go over and see who was there and what they were up to. As I flew over (yes, you can fly) I immediately noticed that CSB himself was sitting at a proper desk, looking like an invited speaker at a seminar. Surrounding him, seated in a semi circle, was a collection of podcasters, listeners, and random second lifers. They were discussing technology, which was no shock to me.

I eventually found a seat, and since the conversation had died down, I brought up a topic Im working on for a upcoming show — Genetically Modified Food and the Tests taking place in Europe. To my surprise, a number of people chimed in, some of which worked in related industries (organic farming, genetic engineering). It was exciting to see people sitting down together and airing opposing opinions and asking questions of each other. All in a virtual world, yet a virtual world made up of real people.

May seem like a waste of time, or a video game, but I’ve seen signs of something more. I still wish I didn’t spend my time wandering around Second Life, but I’m encouraged by some of the interesting and hilarious experiences I’ve had there in my first week.

ps– yes, as you can see, both a guy in a chicken suit and a guy in a fox suit participated in the conversation. all are welcome, regardless of species.