I can barely watch the carnage. The last few years have been bad enough. But now I cover my eyes everytime new articles pop into my Village Voice feed – THEY HAVE DESTROYED AMERICA’S LEGENDARY ALTERNATIVE WEEKLY. DESTROYED IT. 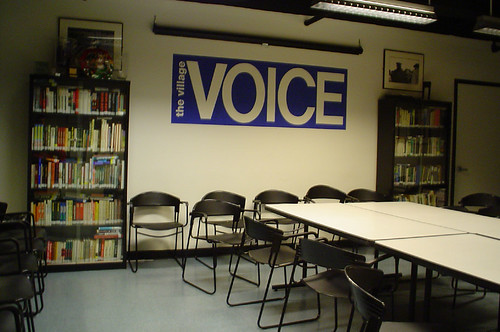 Let’s put aside who “they” are for just a moment.

Long ago, in the year that made the entire US go terrorism crrrrazy, I worked as a lowly researcher at that beautiful news weekly… (flashback music please..)

… oh what a time it was. Making that long commute from Paterson, NJ to Cooper Sq., as soon as you set food in the door of that familiar little building with the VOICE flag hanging over it — it was like stepping into a movie. – for me anyway. Every little cubicle or corner office featured some writer that I had read throughout my teen years, they were newsweekly stars to me. I’d constantly walk by Nat Hentoff’s office, hoping that one of those rare occasions would arise when his door would be open and there he’d be sitting amongst the stacks of carefully aged-yellow newspaper. I’d walk by Cynthia Cott’s cubicle and eaves drop on what assumed were important phonecalls for her column. I’d peak over various cubicles wondering what the hell Michael Musto looked like. And last, but not least, I would steal glances at the cute girl who wrote about all things cool in the NYC music scene. Although the earbuds were permanently affixed to her ears, I’d say hello every morning anyway. She rarely said peep to me, talk about attractive.

Enough of my flashback. The dream is gone. I actually did notice it then, but I tried to ingore it because it was such a romantic experience in my mind. The crusading newspaper I so admired was becoming an empire. It was so dam profitable, media moguls wanted to own it and sell it and buy up other weeklies. The Village Voice was an alternative media empire, it was an oxymoron to me… had to be a mirage or some mistake.

But oh no, tis true. The bubble officially bursted for me when Richard Goldstein and Cynthia Cotts were forced out, just to mention a few. I don’t even know the full story about how the journalistic legend Syndey Schanberg left the paper. But for me, all hell has officially broken loose because they fired James Ridgeway. JAMES RIDGEWAY. I still have to repeat it to myself cause it doesn’t add up – the Village Voice fired James Ridgeway. ?? Oh yeah and they cancelled the blog entitled “the Bush beat”, which fits well with the whole goodbye-critical-journalism theme.

Well thats it. Unless I hear some great explanation from those corporate whores that call themselves management, I’m declaring the Village Voice a dead newspaper. DEAD!
Yes Hentoff is still there. Many of the reporters writing for them still have my respect, including the great journalist and friend who brought me into that world. But I’m sorry, I’m pulling my support. Hell, if this keeps up, maybe I should take it off my CV; I’ve gone from proud to ashamed.

And so I bid thee farewell America’s Largest Weekly. Goodbye to no-holds barred criticism and investigative reporting. So long tradition of Norman Mailer, Jack Newfield and Allen Ginsberg. From here on in, it’s plenty of yuppy hipster trendy artsy fluff journalism, thats what sells ads and attracts the NYC kids.