B has been in Amsterdam this week, visiting from Paris. He’s been living in Paris for something like 5 years now, along with his fiancé. B and I go way back to the days where we studied together in Aix-en-Provence, down in the sleepy south of France, 2000. As cosmic forces would have it, we are both from New Jersey, and for the last 6 years we’ve managed to meet up fairly often in either the US or Europe. I must say it is extremely comforting to hang with an old friend and someone who can relate on so many levels as an expat from new jersey with an additional european nationality, living in a third country. Sounds a bit like jupiter aligning with the pluto or whatever your favorite unlikely scenario. 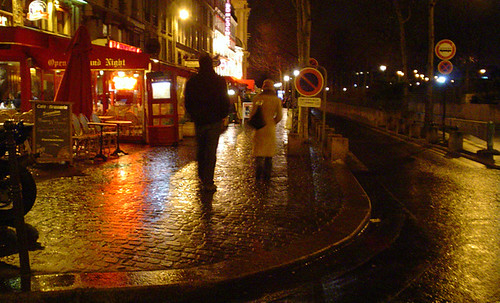 We’ve spent a good amount of time comparing life and work in the Netherlands versus France. Naturally we’ve touched upon the demonstrations in the streets of France and the CPE law which effects the employment of young people. B expressed mixed feelings about the demonstrations, especially considering their timing – only after the law was passed did people take to the streets. He remembered reading extensively about the proposed legislation back in November during the street battles in the Parisien suburbs. Somehow at that time the type of collective action we see now did not occur. A bit late, is what B seemed to be saying.

Practically speaking, whether you live in France or Bolivia or wherever, it is indeed frustrating when people only get concerned about laws after they are passed. Even if there is a good amount of information available and decent warning from all the different types of media available these days, many seem only capable of ignoring it and then later when it’s much more difficult to change something, they get angry. It is, in basic terms, a bad habit. But a typical one of the type of democracies many of us live in.