It was January of 2000, and as I looked out the window of the plane, I could no longer see the Alps. For the past few hours I had been staring at them, occasionally looking away to say something to my new friend B. He was also from New Jersey, Fair Lawn to be exact, and we somehow we figured out back in Zurich that we were both heading to the same university for the semester. And so I looked out the window towards the city lights and the sea and I pictured myself walking amongst the Marseillaise, it was finally happenning, my study abroad in France had begun. 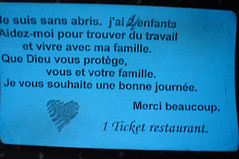 My host lady was coming to pick me up, while B’s was not so kind, so when he found the general direction towards the trains, I wished him luck on his first night and said – “see ya at school.” As I glanced left and right from the entrance of the little airport, i noticed everyone had melted away and it became oddly quiet. The silence gave me a moment to picture how I’d handle the introduction; I had taken a few years of French in high school and done fairly well, Dad was also quite good with the language, though he rarely practiced with me, and I had committed myself to reading LeMonde online every morning from 1997 to 2000, it was my training for this moment. And as Florence and her boyfriend Michel got out of their tiny car to greet me, I realized that while I could tell them how I think the Jospin government will fare or what I think of the rise of the far right party in southern France, I couldn’t do much with casual chats. But it didn’t matter. It is in this moments of panic that things just work for me… and that was no exception.

At some point during this first night in Aix-en-Provence, I blacked out. I mean my memory blacks out, I don’t think I did. I’m known to have a very bad long term memory, but I do remember being squeezed against my French Horn case in the back of the little Peugeot… and Michel would ask lots of questions. My responses were slow and usually in the affirmative. “Oui. C’etait bien. Je suis fatigue.” Most of the responses came back to this central theme. When I wasn’t sure of a sentence I would take it from Portuguese and magically transform it into French. Not sure how great it sounded, but it worked very well. Later I’d properly learn to speak the language and that strategy would still save me sometimes. We arrived at the block of flats that seemed indistinguishable from one another, home sweet home. I was shown to my room, and as I walked in I wondered how many other international students, be they American or Canadian or Italian, how many had come before me, and repeated this same proccess with these similar thoughts. It was my first night of an experience that would change the course of my young life forever.

Or maybe not. But I like to say it that way cause it sounds inspiring. I’ve been spending lots of time with new arrivals from the US here in Amsterdam. Young, inexperienced, inquizitive, ignorant, motivated, open-minded, ready to take on the world… they arrive. Sometimes it seems like torture to have to see it keep happenning over and over, like Groundhog’s Day. But mostly it unlocks memories that I thought I had lost, and takes me back to the night that started it all.