Living Abroad is a Relationship 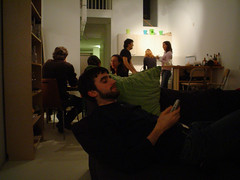 During the chilly ride from the bicyclemark ranch to crazy dr. m’s super delicious paella dinner, my dear roomate summarized the experience of living abroad as being like a relationship or a marriage; initially you’re crazy about each other and every little thing and day is wonderful and new and a joy. And then a year or two go by, and that initial magic wears off, and then you’re left with this things that you still adore about the place where you live, but you also have a bunch of things you do not like at all – that’s where I am at with Amsterdam.

It is year number 4 and the initial magic has certainly worn off. The student life-magic has also faded, and rightfully so since I’m a working stiff now, doing a million little jobs in the hopes of having money to do things like – go to Cuba. Suddenly I see bills I’ve never really had to deal with before. They’re certainly less than I would have to deal with say, in New Jersey, but still – I have never felt more like an adult with responsibility than I do at the start of 2006.

And then comes a paella dinner with the good dr. and good people. Followed by one of those nights, where as BlondebutBright, Mindcaster, and I ride along the gorgeous and peaceful canals of Amsterdam’s oldest neighborhoods en route to yet another party… I just can’t stop laughing. Maybe its because life in Amsterdam can be so random and hilarious sometimes. Maybe its cause the percentage of vokda to orange juice in my drink was slightly off. Or maybe it’s because I hadn’t been out with these two together in so many months. Whatever the reasons, after evaluating how I’m doing in relation to this town, Saturday night reminded me that I’m right where Im supposed to be… on my bike, with great friends, riding down the streets of the dam.