Holiday Debates Over the Years

It is apparently still jesus’s birthday today, if you’re into western mythology as much as I am. And like so many families, mine too has its get togethers here in New Jersey, where family and friends sit down at a table together and eat food and talk about things. Being the debate and dicussion magnet that I am, you can imagine that every year some kind of debate breaks out at the table where I’m arguing one unpopular opinion against someone else arguing another. Being the younger generation, you can also imagine my opinion is usually a progressive, pinko-communist, radical, leftist one. But this tradition gets me thinking…. 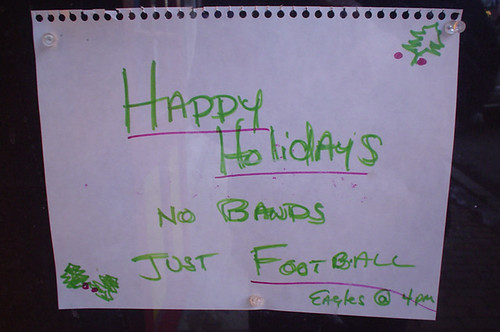 Remember that famous quote, maybe from Churchill, that says something like anyone below the age of 30 that isn’t a liberal (that poor misused word) has no heart, and anyone above the age of 30 who isn’t a conservative has no brain? – Well I think of that quote alot. I look at those around me and my own behavior, and I ask myself – has our rhetoric changed? Am I becoming more conservative as I age? Are they? The answer, by-and-large, is NO. I’m, in fact, just as radical and idealistic as I was back when I first awoke from my teenage political sleep.

However I do detect another change taking place. With each passing holiday meal, and plane ride to wherever, I may in fact be getting sloppier with my arguments and – what scares me most – is that I get lost in my own point. This from allegedly well educated and articulate me. -Who blogs everyday.
-Who was instrumental in the founding of pod-journalism.
-Who claims to be a world citizen….

It could just be overeating and excessive northeast travel that is getting to me… but those are my thoughts. -Happy festivus all ye little who’s in who-ville.