I haven’t been talking about the meetings, the observations, and the thoughts, Ive been having since being back in New Jersey. Mostly because days melt into days and like some kind of battery-recharging, I don’t tend to do much with my time here, besides read blogs, play with the A-Ren, and take care of xmas shopping. 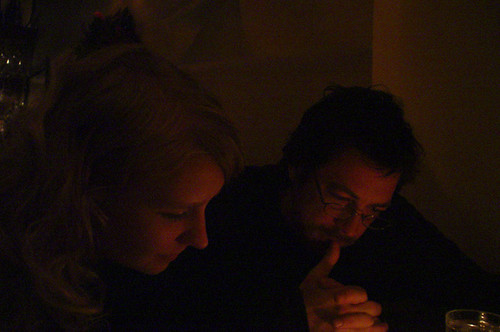 However last night was one of those great meetups, the kind that I look forward to long before making the trip out here. As you may have read elsewhere, I had dinner in the East Village with Ms. Thingk and Jamie of the Known Universe. I’ve been saying those two names alot lately, perhaps because they are great friends with whom I’ve always felt at ease around, or maybe because they both live in Brooklyn and can easily meet up with me at say, the Starbucks at Cooper Square.

And just as I had anticipated, it was pure joy to be around them again. Ms Thingk who I had met in the fishtank at the U of Amsterdam, with whom I had so often explored Amsterdam with and blogged about our adventures. After her wonderful adventures in DC, it is fun and almost fitting to watch her progress as a New Yorker. Jamie who I somehow met through bloggging and blog comments, who later came to Amsterdam and I remember sitting with him in my living room (one of my old living rooms) drinking Scotch and talking about his friend who was travelling to India. He handed me a copy of his book last night, and I haven’t been able to put it down since.

The three of us ate our Moroccan dinner and then proceeded to start taking photos of each other – obviously for our blogs. I recorded some audio but have decided some things are not meant to be shared. That and I messed up the volume level pretty bad. No matter – it was good to be back in the neighborhood that used to greet me every morning, and it was even greater to see good friends with whom I share so much in common.