Since Ms Thingk told me to talk more about Amsterdam life, especially the personal details, this is going to be an exciting update to my fledgling ultimate frisbee career here in the Netherlands.

As many of ye readers well know, I’m a very active new member of the Amsterdam City League, and I practice with the team known as Crunch, one of a few great teams from Amsterdam which play around the country and the continent (i think). Normally I avoid the weekend road trips to god knows where, simply because I treasure my weekend time, especially for podcasting. However this past weekend I joined the Crunch-3 squad in the final games of the outdoor season, in Arnhem. What followed was a whole series of firsts in my life: 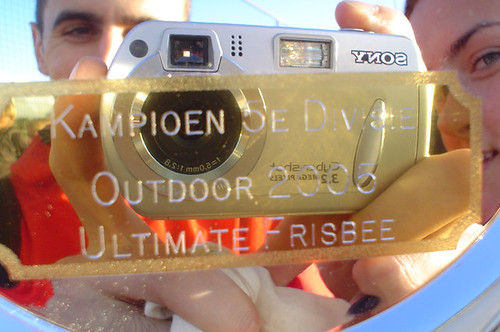 And sure enough, for the first time ever, I was part of a team that won the Netherlands 2005 Division 5 outdoor league.

It’s pretty incredible to see how seriously the Dutch can take frisbee. So many players of so many different ages (the old guys intimidate me). So many teams with so many funky names like the B-Frisbee-2’s or IceyDykes. While there may have been lots of international people present, I really felt like I had entered into a secret dutch sect of frisbee worshippers… and I kind of liked it, despite the sharp pain in my legs.

And YES, Frisbee Girl fans, she WAS there… and she still gives me those looks and I still feel light headed when we talk.