I want your Sussex

Finally caught up with Blonde But Busy yesterday for lunch. I showed her latai, and she treated, as part my two-lunch tour of Amsterdamage. Everything in that place is for sale including the table you’re eating off. What isn’t for sale is the excellent hand-made atmosphere and perfectly lovely waitress who respects the fact that you can speak Dutch with her and English with your lunch partner.

BBB is heading to Sussex, UK for the internety scholars conference thingy. Mathemagenic is going too and I’m sure as I run through my blogroll, so are alot of other blogscholars. Times like this I wish I was a PHD-er… so I could take the harrier jump-jet over the channel and make outlandish claims about blogs and the internet, get my ears boxed by intelligent people, and come home in defeat. That and I’d get to say “I was in Sussex,” which just sounds naughty. (I wonder if that word earns me more blog visitors) 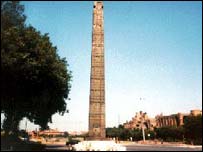 On to something else that’s eating at my brain: “We will make shoes of their skins,” this was something like the quote from Mussolini before sending his army to attack Ethiopia. Then the Pope…. Pius, or John.. or Paul… or Ringo.. he comes out and blesses all the tanks before they head to war. Reason #345 why I can’t forgive christianity. I mention all this to set the stage… September 2004, Ethiopia and Eritrea… not talking to each other much these days… can’t seem to agree on anything. That includes getting their giant penis… errr.. obelisk back from Italy, because Mussolini, like many male politicians and their “missiles”,had a phallic fixation, and stole the giant pole for Italy. So they want it back but they don’t want to cooperate to ship it back. I can’t help but think of Yemane, my good friend and teacher, who used to say how ridiculous this conflict is, and how similar the two nations are.

My advice to their government is to leave the phallus where it is as a reminder of the horrors and mistakes of history. Maybe it will help to remind them not to make war so that more of this type of theft and destruction doesn’t take place. My advice to their people: fire your leaders. They created and have been perpetuating this conflict for too long, because they benefit politically from it.

See… you even hear about East Africa on the Communiqu?!

I musn’t forget to mention a recent post from Chris Missick in Iraq. It’s the details that I really enjoyed. And the whole financial situation of soldiers that I’ve been thinking alot about. Man they have to spend a good chunk of change on the day-to-day things like phone, internet, keeping-cool-gear, etc.

Today’s Music: Jaga Jazzist Horns and Motorpsycho (In the Fish Tank;the label that puts 2 bands together to do albums)