After a month of frequent hello’s and short conversations, my Afghan friend AJ offerred to accompany me to any place I wanted to see in Kabul before it was time for me to leave the country.  The offer alone was flattering, knowing how often foreigners pass through this country doing short-term jobs and then moving on, I was honored AJ would spend time with me to see things he had probably seen a million times.   I told him I had read about the Bagh-e-Babur Gardens and that I would really like to see them.  Without giving me the least bit of a “that’s boring” reaction, AJ started planning the when and how.

A few days later we were in a taxi and speeding off to the Babur Gardens, built in 1528AD by the Moghul emporer Babur.  The whole cab ride AJ flipped through some wrinkled pages with Dari writing on them, I soon realized he had printed out background information for our journey. As any journey across Kabul requires, we were met with plentiful traffic which gave us more time to discuss education in Afghanistan and the United States, as well as asking the cab driver about his age and his upcoming marriage.  Crossing over the almost dry Kabul River, the gardens came into view, perched on the mountainside behind large walls that very successfully hide the splendor within. 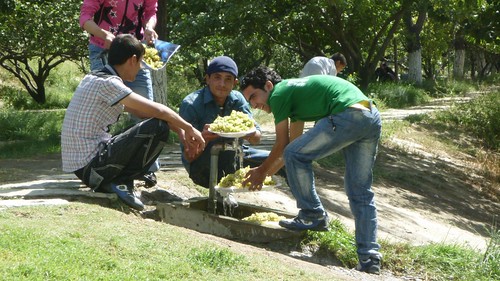 After a brief discussion about how terrible it is that foreigners must pay money for accessing public gardens, we made our way passed the guards, passed the walls, and into the green.  Suddenly the world turns peaceful, the air turns clean, and the stone faces on the street give way to smiles.  As we walk up the tree lined path, I notice beautiful roses and an array of flowers to our right. Beneath the trees to our left there are people, men, women, friends, couples, sprawled out and relaxing just a few hours before lunch.  Some are speaking quietly to each other, others in large groups seem to be telling stories and having a good laugh, still others aren’t talking at all, just enjoying the tranquility.

A ten to fifteen minute walk up the path and we’ve reached a group of buildings. “This one is a ceremonial hall, that back there is a mosque, and up there is the tomb of Babur,” AJ explained to me enthusiastically, as we walked from one to the other. Upon arrival at the tomb we’re greeted by an old man with an ID badge on his arm, he welcomes us after waving goodbye to the previous visitors. What follows is a 4 minute, well memorized account of who is buried here, when they were buried, and what is written on the tombstone.  I would love to share with you what he said, but it all happened so quickly, all I know is that it sounded fantastic.  “Please sign the book”, he motions towards a series of books where tourists leave little messages.  I decide out of all the languages and identities that might already be in the book, it could use a Portuguese text, so I go to work on a nice message from Mark from Lisbon.

For several more hours AJ guided me past a palace, by the greenhouse, and towards a few works of art hidden between the trees and walkways.  Throughout this time we discuss the complexities of life in Afghanistan, from work to school, love to family, religion to tribes, it is one big final lesson in things I have been learning about all month.  These discussions are interrupted frequently as I stop to snap a picture or record a video, each time AJ would wait patiently for me, before carrying on where we left off. 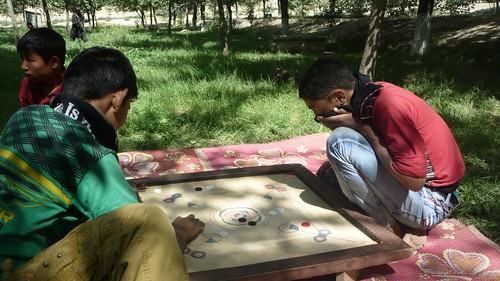 Towards the end of our visit we spotted an open childrens’ game involving sliding plastic circles over a wooden board, a quick explanation and we found ourselves wrapped up in several games for some time.  The snack stand guy near us walked over from his responsibilities to watch us play.  He tried his best in Dari to coach me to victory, but in the end the foreigner could not master this unfamiliar game and AJ took the match.  As we said goodbye to the man, I shook his hand and snapped one more picture of the board.  Again AJ waited for me to take all the pictures I felt I needed to take, then he turned to me and said, “Thank you for coming here and taking these pictures. Thank you for sharing such moments with your friends so that they know that in Afghanistan it is not just war and bad things.” His words echoed in my head as we enjoyed one last fresh apple juice and walked back through the front gate and into a taxi.  I scanned the sad looking Kabul River for traces of water, and thought about all the beautiful things and people I have encountered, and how they have forever changed what I think of this magical country. 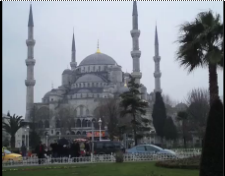 At long last, a short vlog entry that features clips from my first-ever visit to Istanbul. Complete with brief introduction featuring my new “Downloading is now a Crime” shirt from shirtcity.com (thanks!).

Note: As mentioned in the vlog entry, I’ll be returning to Istanbul in April to work on more content relating to press freedom, alternative media, and other quality of life related topics.

Beep Beep Beep Beep…. no streetlight so my motorcycle driver just noses his way into the intersection in the exact style of every other scooter, SUV, tuk-tuk, rickshaw, and bull-pulled-wagon. I’ve got one hand on my pocket making sure my camera doesn’t come loose, and the other on Mr. Lee’s back, we’re both sweating like crazy in the midday Cambodian sun.

Me: Whats that plume of black smoke coming out of that house Mr. Lee?

Mr. Lee: Oh that house with the smoke, thats, Crematory.. how do you say.. our dead people..

We zoom past the national museum, where earlier he had brought me to see the many Buddhist statues, I never saw so many arms in my life. To our right are a series of open garages or perhaps storefronts, each spilling out into the street with artwork. They looked like oil paintings.

Mr. Lee: How many languages you speak Mr Mark?

Me: 5. But they are all European. Nothing fun like Thai or Khmer.

Mr. Lee: Wow. I can only do English, Thai, Khmer. Maybe I learn another one.. like Portuguese haha!

I pop out of my evening snack at Friends, the café run by street kids who are taught how to be professional restauranteurs.  Some of the finest service I’ve ever known.  Mr. Lee is laying back on the saddle of the motorbike, hat tipped over his eyes, the motorcycle guy’s nap pose.

Me: Why do you work as a motorcycle driver?

Mr Lee: I used to have airport job. Everyday had to work, always in the office. No freedom. With motorcycle, I’m free, I can go where I want.  But yes.. money is bad.

Me: Freedom, yes, freedom from a job, I look for the same thing.

He drops me off at the lovely guest house I’m staying at.  Doesn’t say a word about money, it is very obviously up to me what I should pay.  I hand over some american dollar bills and he gives me a smile.  Tomorrow, I take you to Killing Fields. Indeed it is what most tourists do in Phnom Penh and it is certainly what I’ve been looking foward to, if one can look foward to walking on the dead.  Mr Lee tells me he’s off to have some beers with his uncle. Make nice dreams, he tells me.