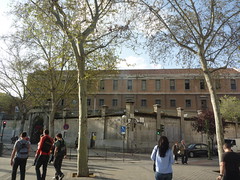 La Tabacalera de Lavapies has long been important site for both workers and the community around it in Madrid. So when it stopped being a factory, members of the community occupied the building and started developing social services, education, arts, gardens, eating establishments and an ever expanding list of features all housed within this large complex. The following is a brief video tour of what I saw during my few hours at La Tabacalera, an intoxicating and exciting place for anyone interested in informal, not for profit, community spaces. 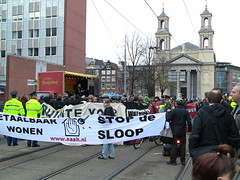 The squatting community in Amsterdam is under siege, with the new law declaring squatting illegal, many who have lived in their homes for a decade or more are now considered criminals and subject to forceful eviction. ; But the community and its supporters have not given up hope and refuse to be made homeless by the authorities.

This brief video clip is from one of the many marches against the evictions, as squatters and supporters marched from Waterloo Square through the heart of Amsterdam.

Podcast recorded on my last day in Lisbon, thinking out loud about the issues related to housing and squatting in Portugal as well as the Netherlands.  Also further laying out plans for what to look into and who or what to be consulted in the quest to find answers and plant the seeds for a solution. No interview in this edition, just thinking out loud and an update for you the audience. 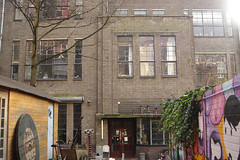