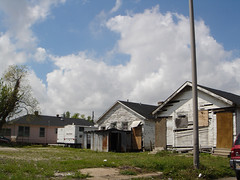 Trial That Sould be Center Stage

“If the Corps didn’t do its job, somebody should be held responsible. Somebody’s got to answer to something.” – The words of a former Lower Ninth Ward resident who lost a daughter to the flood waters that would swallow up his entire house.

The lawsuit filed by New Orleans based Katrina victims against the Army Corps of Engineers has begun, the slow quest for answers and accountability all these years later, has finally landed in the courtroom. The specific grievance, the Army Corps’ failure to maintain the MR-GO channel who’s 20 breaches were largely the cause of flooding in the lower ninth ward following Hurricane Katrina.? Between 10 billion and 100 billion $ in damages hang in the balance, but well beyond the money, for victims of the federal flood, this case is about holding government accountable, and breaking the long held assumption that the Army Corps is immune from any legal action for their actions.

I can remember in 2007 when I was in NOLA END_OF_DOCUMENT_TOKEN_TO_BE_REPLACED

Long overdue part 2 of the talk I gave at the Chaos Communication Camp over the summer, topic is of course Rebellious Communication and the Federal Flood. This part is about housing in New Orleans and my experience exploring this topic first-hand.

If you want to watch part 1, which I put out in December, here is the link. Of course you can learn more about the wonderful camp at the CCC website.