Big Pharma Ads on Their Way

Anyone who has ever been to the United States, or watched commercials on American Television somehow, knows of the never-ending barrage of Pharmaceutical ads that have come to take over the gaps in between programming. They feature excessively clean and happy people walking through parks or high-fiving each other because some ailment they have has been cured by some brand name you should “ask your doctor about”. I can only imagine what its like to be a doctor in the United States today and have your patients coming up to you “asking about” a drug they saw on TV which they would like to have.

This has become the state of the American mediasphere, while over in the EU we still have in place relatively strong regulations preventing that kind of advertisement. Until now.

Ok perhaps the “until now” part makes things seem a little to dire, I would have done better to say that at this moment in time, the EU may relax its rules on Pharmaceutical and medical advertising.  Relaxing doesn’t mean we’ve got old people holding hands and discussing pills to lower their cholesterol on TV. But what we do have is a potential break from the clear policy of no medical advertising in the media.

The information is not easy to come by, perhaps due to its complexity or vagueness, so it is not exactly being discussed by the major news outlets.  What I’ve been able to gather at this point breaks down this way:

Of course many questions remain which I will now pose to various stakeholders and associations, regarding such a change.  Is this taking the EU down the same path as the United States, towards bombarding citizens with clever and appealing visuals regarding what they should choose for when it comes to health and medicine? Is there a push now within EU institutions to pursue this as early as this year? While I’m at it, just how powerful and influencial is the pharmaceutical lobby in Brussels?

Hopefully very soon Ill have some answers which you’ll be able to find right here in a future post. 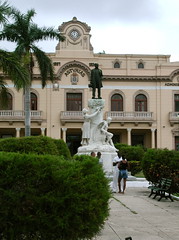 My friend Chris Lydon posted an excellent Radio Open Source recently, as he is making his way around Cuba. As opposed to the highly revered personalities and voices he usually offers us, this time Chris runs into three American medical students who have been studying medicine in Cuba for the last 4 years.

The three ladies have great stories of how they came to study in Cuba and even better tales of how things work or don’t work in their day to day lives. They not only talk about what is unique and effective about Cuban style medicine, they also talk about how they will bring it home to the United States, to communities in need.
There’s much more in this interview then these few lines can properly capture. Do what you do best: listen for yourself.

Currently flipping through the European Health Consumer Index for 2008, which seems to rate nations (in Europe) based on how well the health system treats patients and how empowered patients are. Though as I flip through it, they frequently point out they are not trying to claim to know which is the BEST system in Europe, while still referring to the Netherlands as their winner for 2008.

Their biggest criteria seems to revolve around patients’ rights and subtopics like E-patient files, which indeed there is a pamphlet in my mailbox this week that seeks to explain how that new system works here in the Netherlands.? They also get into what countries are good with introducing new medicines, or which have long waiting lists, or infant mortality, etc etc.? Also following the Netherlands in the top three are Denmark and Austria. You may recall France being often heralded as one of the best health systems in the world, according to this survey, they rank 10th in Europe.. with ,interestingly enough, Estonia right behind them. What keeps France in 10th place? They say the medical system has been too slow in adopting new web based information sharing systems for patient files, and there is some reference to a very authorotarian ASK YOUR DOCTOR tradition that holds patients back.

Such studies are interesting, but as I’ve mentioned before on this bog, in my experience the Netherlands is not big on proactive medicine. Doctors number one reaction to anything is to send you home. That may be appropriate alot of the time, but it leaves me wondering how often patients with something important are turned away… that doesn’t sound very patients’ rights to me. But yes indeed, they’ve got this new e-patient file system and the hospitals seem well organized and nice, and as some of my favorite medical student friends remind me “the next generation of medical professionals in the netherlands are going to rock.” Still, does all this qualify as the best in Europe? I think I’ll keep reading and see if I learn anything more.

Ask Your EU Doctors About

While in the United States I usually watch a bit of television and I definitely spend time listening to the radio.? One thing you’ll have no problem encountering on both of these mediums: ads that include the phrase “ASk Your Doctor About…” and then some perscription drug to help some ailment.? Apparently the public should then go to their doctors and tell THEM what drugs they want.

In the European Union this practice has long been banned. No ads with senior citizens strolling on the beach recommending that you ask your doctor about some brilliant new drug.

However, this October the EU will roll out new pharmaceutical policies that are intended to, in their words, “Modernize” the rules for the pharma industry.? One of the provisions they’re putting forward will allow the pharma industry to provide “additional information” to the public via the media.? Which of course would make it possible for some sort of television ad within Europe that presents viewers with what the industry seems additional info, whatever that means in the end.

Various medical organizations throughout Europe as well as Ministries of Health, are sounding the alarms, concerned that this is one step towards the US style onsluaght of ads suggestion you need to ask your doctor about this and that drug in order to happily walk through the forest.? The industry, meanwhile, insists that they would have no interest in that type of information campaign, and would instead want this to free them up for internet based info that people can request, rather than have it pushed on them.? Meanwhile, advocates of the changes insist that there are many other useful policies included in the package, and that there would be some oversight as to what would be deemed suitable additional information.

This change sounds like the first of many on the road towards a US style system where pharmaceutical companies treat people more like customers than patients. Beyond that, makes medicine ever more like a business than a service. Is it too late to stop them? I will try to find out.