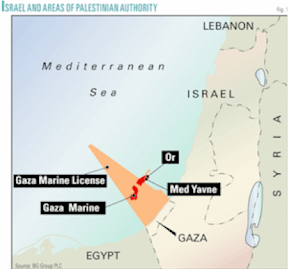 Meanwhile at the same time, Israel’s gas reserves off their coast are set to run out in only a few years. And a recent import deal they made with an Egyptian gas company, was declared illegal by an Egyptian court and that important source had been shut down.
Now we are over 20 days into an Israeli military operation which has been explained as an effort to hunt down Hamas who are a danger to the security of Israel. Hardly anywhere in the mainstream media is there mention of the very big issue of gas resources and the supply situation Israel finds itself in. By law, as of this month, the new president of the PA was supposed to be elected. But because elections can’t be held, the presidency is supposed to pass down to the deputy speaker of the parliament (the actual speaker is in an Israeli jail). The deputy speaker is from the Hamas party, which would mean once again, that the gas deal powerful interests tried to hammer through earlier this decade with the collaboration of Fatah leaders, would most definitely have to be renegotiated in order to increase the benefit for the Palestinian Authority… which would mean a loss in profits for British Gas, Israel, and Fatah associates.

During this podcast I speak with David Schermerhorn, a film producer, world travel, and concerned world citizen. He has been on three boat trips that challenged the maritime blockade by Israel, cutting off the Gaza strip from the outside world and keeping Gaza fisherman from fishing. He’s also put together a detailed timeline explaining the relationship between control of the Gaza waters, gas reserves, and military activity in Gaza.