Delay in the carpal Tunnel

When I’m not in the fishtank, my job involves sittin pretty in an office-type atmosphere. I love being up there because unlike in the fishtank, I’m not repeatedly interrupted by young, beautiful fish, who try to put spells on me which prevent any kind of work from getting done. But today my shoulder aching was noted by co-workers, and the conversation quickly switched to “Why Bicyclemark should fear the wrath of Carple Tunnel.” (also known in the netherlands as RSI.)They threw around all kinds of recommendations, mostly about finally buying an office chair, straightening my lazy back, etc.

I kept thinking of Tony Pierce, who has so often mentioned this horrible condition. So often I remember him making blog posts that simply say “I can’t post today because of the pain, here’s one from the archives.” I can’t believe I’m heading down that road… it’s actually quite scarey. Hell, I even appealed to Tony today for some words of wisdom. Come to think of it, he warned me long ago. 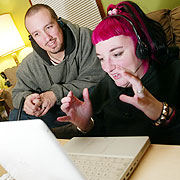 25 years old is the bicyclemark! That’s invincible age! I can climb mountains, run marathons, rub my tummy and pat my head at the same time, .. what’s this arm pain? Doesn’t it know who I am? Doesn’t it know that without the inkernet and computers, I’m done for? Thank the golden calf there’s podcasting, cause my voice never betrays me. You hear that voice… don’t fail me now!

Speaking of the pod, I just read the Dawn and Drew article in the US’s lamest national paper. For a paper that is normally quite journalisticaly-challenged, it’s a pretty decent fluff piece. And nice for DnD, my internet bitches.