December seems like a month where, besides celebrating a whole lot of birthdays, we also pause and remember some of the worst atrocities the earth has ever seen. I love using big phrases like that, cause then someone will think “you say tomato, I say tomato sauce,” and who am I to argue. Just a blogger folks. Just a blogger.

Back to the point, before I do the usual drifting like Tom and Huck, Dec. 11th 1994 was the anniversary I wanted to point out; Ten years to the date, when the rusty Russian war machine invaded the Chechenskaya Respublika. I’m not here to try and debate why they did it or who was wrong, for me there is no debate. The images and statistics that so much of the world have ignored: 50,000 killed in the first war alone, air strikes that bombed Grozny back into the stone age, the (now repeated in Iraq) acts of rounding up all the men older then 16 and imprisoning them. I’m sure it was worth it… this liberty and freedom from terrorism that Moscow promised. So much of the population had to be wiped out, so you had to do some torturing/raping, and then maybe you had to destroy everything in site… it’s all for a better future. Trust mother Russia, and her friends in Europe, US, and around the world, who – if they even noticed- spend those years doing business as usual. 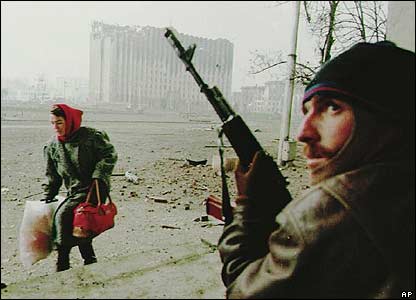 I myself sat in the library of a tiny University in southern France when the second Chechen war broke out. I sat reading 4 newspapers per day, scribbling articles which I’d never have the nerve to send to a newspaper, other than my tiny column in my college newspaper in NJ, and then posting them on my geocities site, which later became this here blog. I guess I’m alot like certain governments and international organizations, I sat around talking a mighty talk and writing articles, and then at night I put it to the side and went to have another glass of wine at Les Deux Gar?ons. Which in retrospect may have not been a good place to meet women. (?)

I joke… cause well.. it’s part of dealing with all the bullshit. But still.. It’s a crazy anniversary… it was 1994, modern times. Now, with all the stupidity of the so-called war-on-terrorism, people who speak on behalf of Chechnya are suspect… dangerous. The government they elected , whoever still lives, is in exile in the US and UK. Hell, I’m sure Chechnyans themselves would tell me to shut up, cause they must be so tired of hearing about all these politicians with blood on their hands…just wanting to live a somewhat normal life. Whatever’s left of it.

So here’s to you Chechnya, in recognition of all the hell you’ve gone through (a reality I cannot even being to understand from my comfy seat)… the world governments may not a have a spine, but bloggers do, bicyclemark’s commmunique (and always has) recognizes the independent and sovereign Chechenskaya Respublika.. if there’s anything left to recognize.