Any day now an academic gold nugget is going to fly out of my brain relating to blogs, personal publishing, and power-relations. That nugget will lead me on my renewed quest for PhD, and any egghead that stands in my way will feel the wrath of my passive-aggressive internet hatred. Now I just need a supervisor and a university, any takers out there, please comment below. My primary desire is to stay in fair Amsterdam, but if you’re persuasive.. I am not averse to being persueded. Also I don’t have much in terms of morals, so if you’d like to tempt me with material things, I’m listening.

One skill I know I have, and would venture to say many out there have is diplomacy. Defined by that midget webster’s dictionary:

1 : the art and practice of conducting negotiations between nations 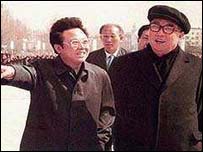 I’m referring specifically to definition two when I point out two comedians that have absolutely no diplomacy skills and somehow that is their job: GW Bush and Kim Jong-Il. This morning’s FT described a little catfight of words these two have been having:

-Jong-Il: “He’s a imbecile,an idiot and a man-killer.” (Referring to Bush)

-Bush once said he “loathed” Jong-Il.

-Jong-Il responded recently that Bush is “a political imbecile bereft of even elementary morality as a human being and a bad guy.”

These are world leaders? Neither elected, it’s worth noting. And furthermore both heirs to their fathers’ political dynasties. No wonder they have such a special way to speak to each other. But nevermind all that, it should be a basic job requirement: Don’t be an insulting bastard towards other leaders. Clearly they both absolutely suck at being diplomats, but maaaan are they entertaining.

Tom Tomorrow’s guestblogger type-person – Bob Harris- testifies to exactly one of the side-effects of having such unqualified leaders. Apparently Bob is in Olympiakos land and he’s been watching undercover as a New Zealander. I love a country who’s team colors are all-black. They even call the rugby team the “all-blacks.” But I digress, Bob had heard lots of boo’s for the US and blogs about the negative receptions US folk are getting in Athens and the possible reasons behind it.