Some people might imagine that a year and a half after Katrina, life for many survivors might be improving as the rebuilding process progressed. But what if the rebuilding process was not progressing? More than that, imagine hundreds of thousands of people still living in FEMA trailers that are actually poisioning them? While the mainstream press turns its corporate back, an unbelievable crime is taking place along the gulf coast… again. In this program, with the help of people working for the recovery effort, we lay out the agonizing facts.

We discuss:
– FEMA Trailers and the toxicity levels
– Health problems being reported and underreported
– FEMA’s response
– The Trailer Companies and the building of the trailers
– Options for trailer residents
– Next steps for Sierra Club and Katrina
– The delays of the rebuilding process
– Causes and those responsible
– The poor and housing in the NOLA area
– Lack of coverage of the issue
– plus much more, so please listen.

Nation Article on this topic

I’m pondering a trip to the US in the coming 6 months. Hoping money and the moons all align so that I might be able to go over for a bit longer than the usual 2 weeks.

One place I hope to be able to get to somehow is New Orleans. I know it was probably media cliché.. but it has also become an under-reported and poorly reported subject. What happenned to that city is not a tragedy, but in fact, one of the biggest crimes of the century. Actually two crimes, as the government and business leaders have pretended not to know anything about climate change and the dangers it involves. And yet no one in charge was arrested, and hardly anyone resigned. More criminals and mass murderers at large in Washington DC.

How much reporting are the toxic trailers getting? Over 200 thousand people living in FEMA trailers that are known to have high levels of toxicity and cause all manner of resperatory diseases to so many.

Following the recent terrible tornados that hit the city, I went over to NOLA dot com, to see what people are talking about in the forums. I happenned to click on Gentilly forum, and there i read a sad, tragic, and almost poetic proclamation by a resident by the name of LowDownLou:

New Orleans has had more destruction due to weather since Katrina than it has had within the last 10 years before Katrina. How many Tornadoes have actually hit New Orleans in the last 20 years pre-K?

You all remember that song: If It Aint One Thing Its Another?

People lookn for a place to stay——

But my local congressman was only a Thief—–

When I heard that my friend and blogger inspiration, Mr Tony Pierce, was driving down the eastern US heading towards New Orleans, I immediately send an email. “We gotta do a podcast about what you see in NOLA” I told him. And of course he said ‘yes’. (we’re still working out the logistics)

But when I looked yesterday at photoeassy on LAist, and even better, his videoblog entry interviewing a high school girl in the NINE WARD, I had to watch it again. I sat back in my chair and once again felt inspired. Not that I had forgotten, but it reminded me of what I love about being a citizen reporter through personal media. The spontaneity of it all, the rawness, the honest curiousity. Free of that desire to look polished and clean and perfect… focusing on the message. And through his posts, I certainly heard a message about what is or IS NOT happening down in New Orleans.

For tonight I’d simply like to recommend you check it all out, all his writing from the big easy.. and especially that video. I know it may not connect with you, but from where I sit, this was excellent work and important when it comes to telling a story without expensive cameras and executive producers. 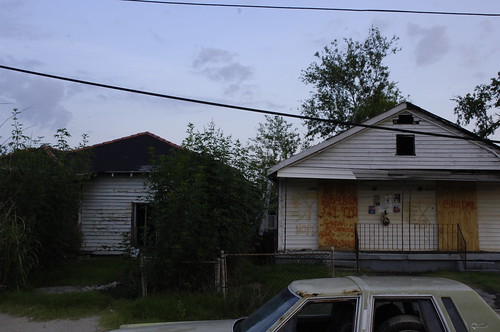