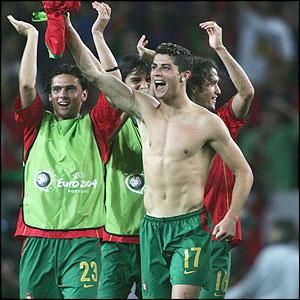 What really made my week: my houseboat neighbors slapping together a pseudo boat, just in time for Koninginnedag (Queens Day) It started several months ago, as far as I can tell something like 2 guys in this place, and they got this big black raft. They slapped an unreliable engine on there, and cruised around on this hideous thing with blue smoke spouting out of the engine. Now, I suppose because of the coming holiday festivities, they attached a big square piece of plywood ontop of the raft. Add four chairs and a coffee table, and voila, a stylish new boat. I love it. I do suspect, however, that if one has a few drinks and lays back in one of these chairs, you end up in the canal. All this means Queens Day is gonna rock.

I was clicking around the Morning News this evening (how ironic!), and somehow I came across Saddams Interrogation Log by Brian M. Sack. I found it to be witty and I predict, quite accurate. For example, this entry:

I played chess with SH, who is not too bad a chess player. At one point, my bishop took his rook. I told him that in the U.S., when you lose your rook to a bishop, it is customary to divulge a little personal secret, like maybe where the WMD are. He said we weren’t in the U.S., then he took my pawn with the horse piece.

It really made me wonder lots of random things about the man himself. Specifically, will we ever hear his side of the story? More importantly, hearing about all his connections with the different governments around the world. (US, Russia, Yugoslavia) Too bad they’ll end up forming some kangeroo court that won’t really help reveal any new information, other than shouting “WHERE ARE THE WMD’S” every five minutes. I did manage to discover Saddam’s blog, though I find the author’s work to be subpar, like Saddam himself.

It is not often that one particular article can cause me to get so upset and generally horrified about the author and anyone who might believe in him/her. But the latest issue of Foreign Policy has an article written by Sam P. Huntington, that gets my vote for most awful article of the year. Why so awful? Because his article is basically a warning to the United States that Mexican Americans are a threat to the American way of life. He claims that Mexicans are becoming a huge percentage of the population, refuse to stop speaking Spanish, keep a low quality of life, and do not assimilate to the “American Dream.”

Let me just provide a few excerpts, if I can avoid throwing up:

“American identity is now defined in terms of culture and creed. Most Americans see the creed as the crucial element of their national identity. The creed, however, was the product of the distinct Anglo-Protestant culture of the founding settlers. Key elements of that culture include the English language; Christianity; religious commitment; English concepts of the rule of law, including the responsibility of rulers and the rights of individuals; and dissenting Protestant values of individualism, the work ethic, and the belief that humans have the ability and the duty to try to create a heaven on earth”

“Demographically, socially, and culturally, the reconquista (re-conquest) of the Southwest United States by Mexican immigrants is well underway.”

“As their numbers increase, Mexican Americans feel increasingly comfortable with their own culture and often contemptuous of American culture. They demand recognition of their culture and the historic Mexican identity of the U.S. Southwest.

The transformation of the United States into a country like these would not necessarily be the end of the world; it would, however, be the end of the America we have known for more than three centuries. Americans should not let that change happen unless they are convinced that this new nation would be a better one.”

Huntington, while trying to act very “matter a fact”about his conclusions, seems quite scared. Maybe I can help calm him.

I have more news from the front lines of the “ethnic” war. Be afraid. Be very afraid. The Mexicans and other Spanish speaking cultures are not the only threat to your white anglo-protestant paradise!

Let me explain… I may be writing and speaking English, but I’m a proud Portuguese-American. YES! I speak Portuguese at home, and also on the street with the now close to 1 million Portuguese people who make their life in the US. We teach our children the language, we have traditional festivals, and worst of all – we’re not anglo-protestant!

It gets worse, there are Polish folks in my home city! YES! They speak to each other in Polish, and I hear they have language schools as well! They go back to Poland often, and some dream of going back, or staying here, YOU NEVER KNOW!! Mr. Huntington things only get worse for you and your friends, because I’ve heard the Russians, Chinese, Koreans, Jordanians, Turks, Haitians… they’re all here! Would you believe they call themselves American? But they don’t like baseball… hamburgers.. and hostile take-overs – America is doomed!

I’m writing to forewarn you, lock your doors, don’t listen to the radio, don’t talk to the neighbors. There are more of us then there are of you. If you survive this “invasion” we might even help you build your little elks-lodge, like the good anglo-protestants like to do.

Our sweat is the oil that keeps the machinery of this and many other nations, going. We built this place! In the end sir, neither you nor some old white men in Washington decide what the American dream is. We do.

Stay safe out there,

In less than 1 week I shall be on a TGV/Thalys train to Paris. As a train-o-file, I’m excited just to be getting on such a smooth ride… even if it has been around since 97 or so, it still seems so high-tech. So today when I noticed that they’re working on a China to Europe connection, I got super excited. At some point in my life, I hope to ride on such a train… Europe to China! Across Russia and Kazakstan! One day, oh yes.

This year there’s a conference that no one should miss, it’s called “The Fifth Hope: Hackers on Planet Earth.” It’s taking place in New York City and it will bring together some of the most creative and original characters in the tech world! You can hear more about it and get a general idea of the nature of this conference my listening to Off the Hook or Off the Wall at 2600.com I’m going to see if I make it out there in July, it’ll be sad to miss this one.

Fantastic documentary film that I’ve not yet seen, “Searching for the Wrong-Eyed Jesus” It’s about the SOUTH of the US. It looks disturbingly interesting. And the music features some truely original artists. I’ve missed my chance here in Amsterdam, but I’ll be renting it over at Cult Videotheek ASAP.