Dalai Lama of the Mic

It is the eve of my bigass speech at one of the biggest Universiteit van Amsterdam events of the year. I just noticed my name on the website, it’s in Dutch, but if it helps any, my name is still spelt the same. Speaking in public is my fort? normally, but this audience has me a little worried, a mix of students, faculty, and important government types. Why be nervous? I don’t know… maybe I should resort to the traditional “everyone in their underwear” fantasy. Then again.. that could prove disastrous what with all the good-looking folks in this town. I’ve written a speech which I have no intention of using… I’m tempted to physically rip it up on stage.. I love spontaneous speakers, or at least those who make me think they’re doing it off-the-cuff. Later maybe the text of my speech will be made available on the Communiqu?. Most of my speech training today has consisted of watching my Eddie Izzard DVD (given to me by king B of Queens)… so you can bet I’ll sound like him tomorrow. Someone should stop me when I start doing the “Death Star Canteen” skit.( commence downloading!)

Today’s reading included this article about how Iraqi squatters in luxury homes are being punted out by the police. I’m disappointed. These houses used to belong to all the powerful government types and they all ran away or whatever, I feel it’s a finders keepers situation! I hate hearing the same disneyfication going on there that we saw happen in time square and I see happening to squats here in Amsterdam. What am I talking about? This government push to make housing that only the very wealthy can afford in city-centers, so that the regular people have to go live in shitty neighborhoods in the outskirts in the shadow of a nice paint factory or nuclear power plant. (oh wait.. they still haven’t found those in Baghdad… hahah.. I kid.. I kid) I just think if the owners have fled the country and they’ve abandoned their nice house, someone who needs a place and takes real care of it should be able to move in. Maybe over time they can even be encouraged to legally take steps to acquire the building they’ve squatted. This has also happened in Amsterdam.

In my quest to explore the wild-wild west of the blogosphere.. I came across Bunny McIntosh. She’s quite well known in some circles I think, but for me it was a great new discovery reading her blog. I think she’s crazy and creative in just the right way, and so I wanted to recommend her to you. Plus after one quick IM from me.. she told the tale on her blog. Oh and don’t miss the photoessay of her meeting Tony Pierce.

Tuesday begins my South America theme, so look out for that.

And how the hell am I ever going to get into these hip blog conferences if I can’t afford the 90 Euro plus entry fee. Fucking elitists, gimme a nice 9.99 price.

Today’s Music: King of Convenience – Versus (dam these guys are great.. Chris Missick was right)

It seems as though Blonde But Buttery and I have these semi-daily chats where we conduct the blogosphere round-up. This whole week we’ve been working as co-group leaders for new students via the International Student Network, and I’m pretty sure our whole group thinks we’re either insane or the biggest internet nerds EVER. Despite the fact that we have a lovely collection of Spanish, German, Israeli, Canadian, American, Japanese, British, French, and Polish students, this is our third intro gig and we’re considering retirement. The parties have lost some of their luster, the routine is too routine, and shit – we’re workin’ folk. Still there’s so much to learn from these dynamic people who find their way over to Amsterdam academia.

Speaking of academia, ESchool had a post about Philly wanting to become the wi-fi capital of the US – having the largest wireless internet hotspot citywide. Now it sounds lovely in theory, and I admit that if it comes true I might have to make a pilgrimage there like a hippy to Woodstock. HOWEVER, It is hard to believe.

Only two years ago my little Plymouth Sundance was set ablaze overnight in South Philly, and suddenly the city has prioritized putting wi-fi everywhere? All I ask of you Philly, is that you first tackle the problem of random arson and say – violent crime, before (or at the same time as) you make everyone into a Netizen. I’m sure the kids will love it though, after a hard day of setting things on fire, jump on the web and learn about nuclear fission.

My dear friend, co-worker, and occasional musical partner Amy (she’s a celeb so I can call her by her real name) recently returned from a personal pilgrimage to Lebanon. Her stories and her photos have completely fascinated me, add to that a pair of wonderful Lebanese ladies that I befriended in the last months… suddenly I’m learning tidbits of history and culture. So I started flipping through the Daily Star, which I haven’t done since June. I have noticed in the last few days the news about France and the US pushing for Syria to pull its 20,000 troops out of Lebanon. They’ve been there since the end of the civil war that I believe started in the late 70’s til the early 90’s. Obviously this blogger is in favor of such a move, at long last. But I digress, the point was Lebanon seems like a beautiful and mystical place, and when I look at these photos I see scenes that remind me of Portugal. Guess it’s a Mediterranean thing.

I might ask Amy to guestblog a bit on her experience… yeah.. that would be fun.

Also next week I’ve decided to have a theme…. “South America.” Pretty broad, I know, but my each of my posts will have some element related to that part of the world, besides my usual verbage. 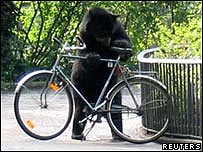 Somewhere on the net… you knew there had to be a blog called McBlog, altogether it doesn’t look that interesting. What is interesting is that I finally saw Supersize Me last night (remember I live in the cinema-third world called Europe where films arrive by row-boat)Allow me to reflect, if you will, on my cinema-going documentary-viewing experience:

Though I don’t get to the cinema often, I feel this documentary is the best of the year. Surpassing F-911, and that’s not a knock against Michael Moore – I refuse to join that whole trend of Moore-baiting. I just felt it was clear, informative, entertaining, relatively empirical, and shit… who didn’t worry about his health as the month slowly went by. But there is one factor is this film that I feel deserves the utmost attention: The branding of children in schools; getting them while they’re young. If I ran a country, besides having the most unproductive and lazy economy ever, marketing to children would be considered a heinous crime.

I can remember, as alot of you might, my high school experience in the mecca of suburbia= Union, NJ. I recall comparing schools and almost gloating that Union High had Burger King Food, a Shop Rite (supermarket), and a Bank (Union Center). For whatever reason, it seemed cool because we loved such brands. Now I shudder to think about the side-effects and implications. I can also remember visiting, I think, Brick High School (NJ) and everywhere I walked having a Coca-Cola advert in my face. When I think about all those struggling schools with financial and “test-result” troubles, it angers me to think how companies sneak in offering money or textbooks in exchange for some good clean product placement. Come to think of it, I also remember those bastards who provided grade-X food at the University Dining hall at WPU.(they’re in the film too)

Apparently the director and star of the film has a similar concern, he wants to get the film shown at every school somehow. I hope teachers will make it a priority to not just show the film, but really discuss and examine the issue to better-equip our little future consumers.

incidentally he – Morgan Spurlock – keeps an outstanding blog complete with RSS feed. Today I read about his experience in Finland – hilarious, my Finnish readers (hi guys!) might especially enjoy since it involves drinking, saunas, and nakedness.

Next post I’ll be officially moved in, with all new graphics and colors, and ready to tear-into the RNC in NYC. It has begun, and now more than ever- I wish I was in NYC cause I’d walk all over their grass alongside a million people who think its insulting to have this convention in NYC. Here’s the Moblog from where I follow the action.(recall my past post about NYC as sacred ground)

Oh yeah- I will also have to talk about the Olympic Medal Count as a reflection of global economics. Hmmmm.

Today’s Music: Coheed and Cambria mix with Taking Back Sunday (since the show is tonight)